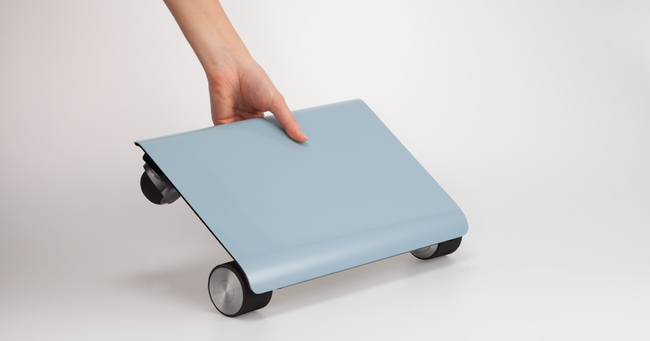 In the Dragon Ball comic books, there was an item called the “Flying Nimbus” that was a cloud the characters rode on. This fantasy vehicle let a single passenger ride through the skies. Kuniaki Sato, aged 28, is the president of Cocoa Motors. He wanted to make the Flying Nimbus a reality, and he all but has. 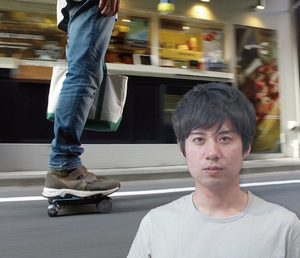 The WALKCAR, developed by Cocoa Motors, is a single-person vehicle that can be carried around. Company president Kuniaki Sato is a creative and up-and-coming entrepreneur who is just 28 years old. Photograph courtesy of COCOA MOTORS

The result is a carbon board sized at 13’’ and with four wheels attached. It is called the WALKCAR.

While it does not fly through the sky, it is an electric vehicle that seamlessly moves when you stand on it. It achieves maximum speeds of 16km/h, or equivalent to a bicycle. The unit weighs 2.8kg and has no steering wheel. It is unique in that it feels like carrying around a laptop.

You may envision this as an electric skateboard, but it is not. This is actually a congeries of technology and features a range of sensors.

When you put one foot on it, it engages a lock to ensure it will not move out from underfoot. When you first put both feet on and are still getting adjusted, it moves slowly. Once your center of gravity stabilizes, it begins to pick up speed. You apply your center of gravity in the direction you want to go, and the wheels adjust to that orientation. If you seem likely to crash, you remove your feet and it stops on a dime. There is no worry of the WALKCAR going careening forward like a skateboard.

The company is already taking pre-orders for the WALKCAR, and it is slated to go on sale this fall. This is no longer a dream of the future: these innovations are here today. Cocoa’s first prototype started with a piece of plywood.